Home Society Oba Olaniyan in US, Seeks Foreign Partnership for Ipokia Kingdom’s Progress
Facebook
Twitter
Google+
Pinterest
WhatsApp
His Royal Majesty, Alayeluwa Oba (Dr.) Yisa Olusola Adeniyi Olaniyan, the Onipokia of Ipokia land, on Thursday morning, the 21st of October, 2021, visited the United States of America, in a bid to secure foreign support, towards development in Ipokia kingdom.
Oba (Dr.) Yisa Olaniyan who visited the city of Houston, Texas, United States of America, in company of his Queen, Olori Folasade Olaniyan, were received at the airport, by families, friends and well wishers, of Ipokia land, accompanied by traditional drummers, singers and a trumpeter to the amazement of many, who witnessed the event at the airport, organised by Chief Mrs. Morounkunbi Merriman Johnson, the Yeye Oge of Ipokia kingdom, after which Oba Olaniyan and his Queen, were treated, to an exclusive breakfast.
Other notable personalities at the reception for Onipokia and his Queen were, Bobaseye of Ipokia, Chief Oluwaseun Alabi, musician, Femi Johnson and Mrs. Balqeez Aminu among other close allies, to the Onipokia of Ipokia land.
According to Onipokia’s Media Consultant, Dare Gbadebo, Oba (Dr.) Yisa Olaniyan’s trip to the United States is business oriented, as Onipokia’s main agenda for the trip is to seek and meet with potential investors, in a bid to create investment opportunities for Ipokia and its environs, with focus on would be investors, who are ready to tap into natural resources, available in Ipokia. 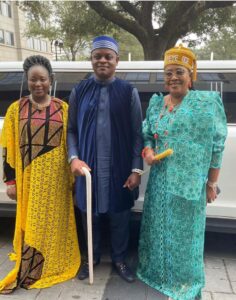 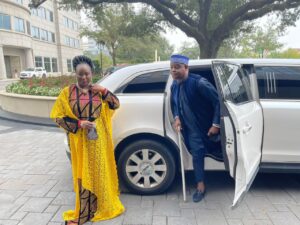 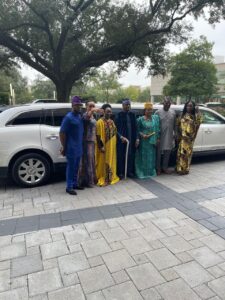 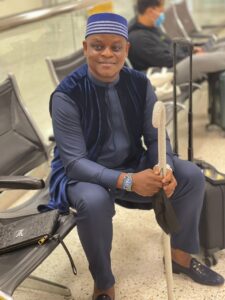 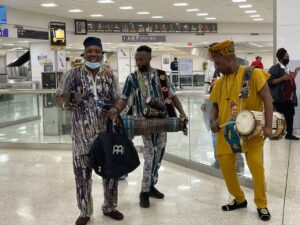 Dare Gbadebo also informed that other agendas for Onipokia during his stay in the US, is to as well seize the opportunity, to launch and utilise Oshingin II foundation, set up legally in the United States as a NGO to seek help and support from individual and corporate bodies for Ipokia. It was also revealed, that HRM, Oba (Dr.) Yisa Olaniyan, has intended to meet with the Mayor of Houston, TX, USA, in a bid to create development opportunities for Ipokia and it’s people. The business trip to the US, is the second within this year by the Onipokia of Ipokia land, Oba (Dr.) Yisa Olusola Adeniyi Olaniyan, Ariwigbade Oshingin II, towards the development of his domain, Ipokia kingdom and it’s environs.

All The Pictures as Dr. Chike Akunyili is Buried in Anambra