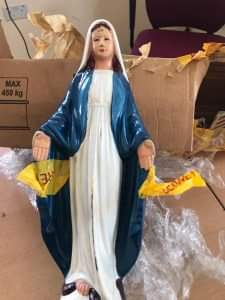 Drug traffickers looking for a fail-proof way to smuggle illicit drugs decided on the religious route—by stuffing their stash in a statue of the Blessed Virgin Mary, Mother of Jesus.

NDLEA operatives embedded in two courier companies intercepted the drugs concealed in the statue and some in auto spare parts to be dispatched to Canada and the United Arab Emirates.

A stash of 140 grammes of methamphetamine stuffed inside a statue of Mary headed for the Philippines was intercepted in one of the courier companies.

Another 500 grammes of heroin concealed in auto spare parts headed for Canada was intercepted in a second courier company.

“I Had Coronavirus and Was Cured” … Raymond Dokpesi jnr confesses