Home Showbiz ‘God Be Praised’: Ubi Franklin Reacts to Baby Mama’s Crashed Marriage
Facebook
Twitter
Google+
Pinterest
WhatsApp
CEO of Made Men Music Group cum blogger, Ubi Franklin has reacted to the marriage crisis between one of his baby mamas, Sandra Iheuwa and her estranged husband, Steve Thompson. Sandra Iheuwa’s marriage to her husband, Steve Thompson, crashed over irreconcilable differences.
Steve in a series of post on Instagram, noted that he wasted 45 million Naira to marry Sandra only to discover that Sandra “married for social media, not for the home.”
He added that Sandra fights everyone, including his family members; and constantly reminds him that she’s an American and tells him that he married her to get “Green card”. 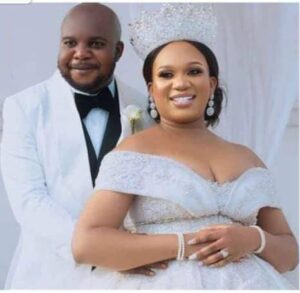 He said his marriage can no longer work because of Sandra’s “too much use of social media.”
He also said that no man can marry Sandra.
Reacting to the crisis, Ubi Franklin via his Instagram stories praised God. He wrote; ‘Chukwuebuka’.
Sandra is also reportedly pregnant with her first child for Steven.
Sandra also has other kids with other men, including a daughter she shares with Ubi Franklin.

BBNaija: Whitemoney To Ask Jackie B Out