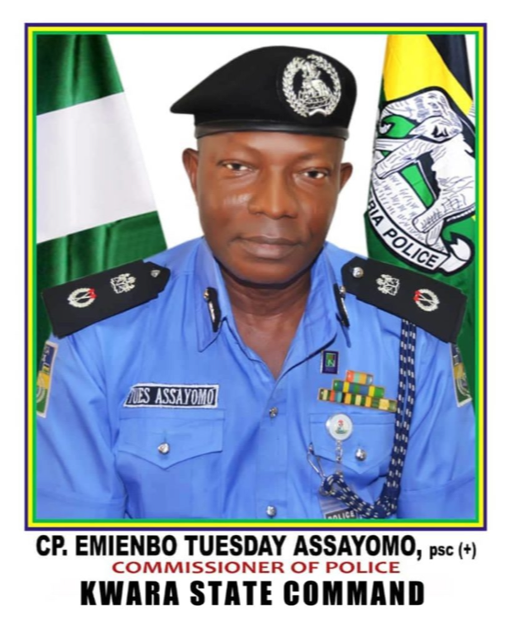 The new police chief in Kwara State, Amienbo Tuesday Assayomo, a Commissioner of Police has assumed duties in Ilorin.

Mr. Tuesday Assayomo, an indigene of Bayelsa State received Bachelor of Science degree Bsc (Hons) in Business Administration from the prestigious University of Lagos, Akoka, LLB (Hons) from the Rivers State University of Science and Technology, Port Harcourt and BL from the Nigeria Law School in year 2000.

CP Assayomo psc was enlisted  into the Nigeria Police Force as a cadet ASP in 1988 and he has served in different capacities including the Criminal intelligence Bureau (CIB) now known as SIB,  Divisional Police Officer in various Divisions and the Zonal Police Public Relations Officer (ZPRO) Zone 5, Benin City, Edo State.

He has attended several professional courses, seminars and workshops both within and outside Nigeria.

CP Amienbo Tuesday Assayomo psc+ is a staunch believer in the right of citizens to live in a secured and peaceful environment, and as such, he is fully prepared to make maximum use of every available resources both human and material to achieve that singular objective in Kwara State.

The new police chief has promised to build on the achievements of his predecessor by strengthening the existing collaborations and partnerships between the Command and residents of the state.