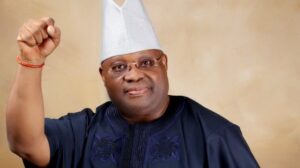 Senator Ademola Adeleke, who has been away in the United States of America for close to two years now  has returned to Nigeria.

Fondly addressed by supporters and loyalists as ‘Imole’ ,  Senator Ademola Adeleke left  the country  shortly after the Supreme Court   brought  the curtain down on issues relating to the September  2018 guber election on 5th of July  2019.
Adeleke  had stood as Osun State PDP gubernatorial candidate in the  said election.
Gubernatorial election will hold in Osun State on July 16, 2022 and Adeleke has not only made it known that he will not only enter the gubernatorial race again but really means business.   He also made his arrival in Osun  a carnival-like.