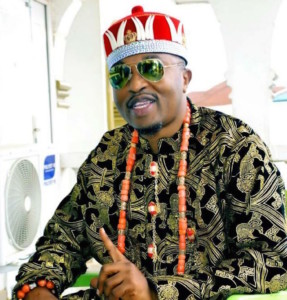 While submitting that he doesn’t trust politicians, Oluwo of Iwo, Oba Abdulrasheed Akanbi has   said Governor Gboyega Oyetola of Osun State stands out.

He said the governor has  gained the respect of all and sundry having ensured he delivers good governance.

The Iwo monarch penultimate Wednesday chronicled the achievements of the Gboyega Oyetola administration while disclosing that the governor has made him embark on the process of rebuilding such trust.

‘Personally, my knowledge of most politicians had made me set a boundary with them but Governor Gboyega Oyetola has made me embark on the process of rebuilding such trust.

I was hoping to see a crawling state when he assumed office but interestingly, he has been up and doing coming up with policies that  have eased things for  everybody.

Oyetola creditably instituted template for virile leadership for other leaders to follow in his footsteps.

During his election campaign, he made many promises that were doubted because of the prevailing economic situation, incredibly, he is fulfilling them in a way that I wonder sometimes where he sourced for such resources. I don’t trust politicians but I trust Oyetola.

He is a leader whose scorecards are marked with merits in every way.

I’ve strong conviction that  he will be rewarded accordingly.

The governor recently said contractor will be made to return to the  Iwo-Osogbo road construction site.

Many, including me had doubted easy  management of the state economy because  Governor Oyetola came at a time  that  the country’s economy was not friendly with anyone.

Paying salary was hectic for every state in the country but Oyetola has ensured regular payment of salary to the civil servants. This feat is exceptional and unexpected at a  trying time like this.

Capital projects were not left out. He has managed the state to the admiration of all and sundry. I wonder how monthly salary could be paid promptly while still embarking on capital projects.

Equally, general hospitals and primary health centers in the state have been given a facelift. The hospitals, apart from getting renovated to meet modern standards and got well–equipped.

There has also been proper monitoring and supervision of the hospitals.

On security,  Governor Gboyega Oyetola  has  excellently done well to protect the residents of the state. No doubt, his security score card makes Osun the safest state in the geo-political zone.

He provides necessary supports to the Nigeria Police Force and other security agencies. He recently launched and strengthened Amotekun by making what they needed available.

Just  a few months ago, the governor presented 13 new luxury jeeps to judges to aid their performance. He has a miraculous zeal.

If what defines continuity is merit, then Oyetola deserves it’,  the Iwo monarch  said.