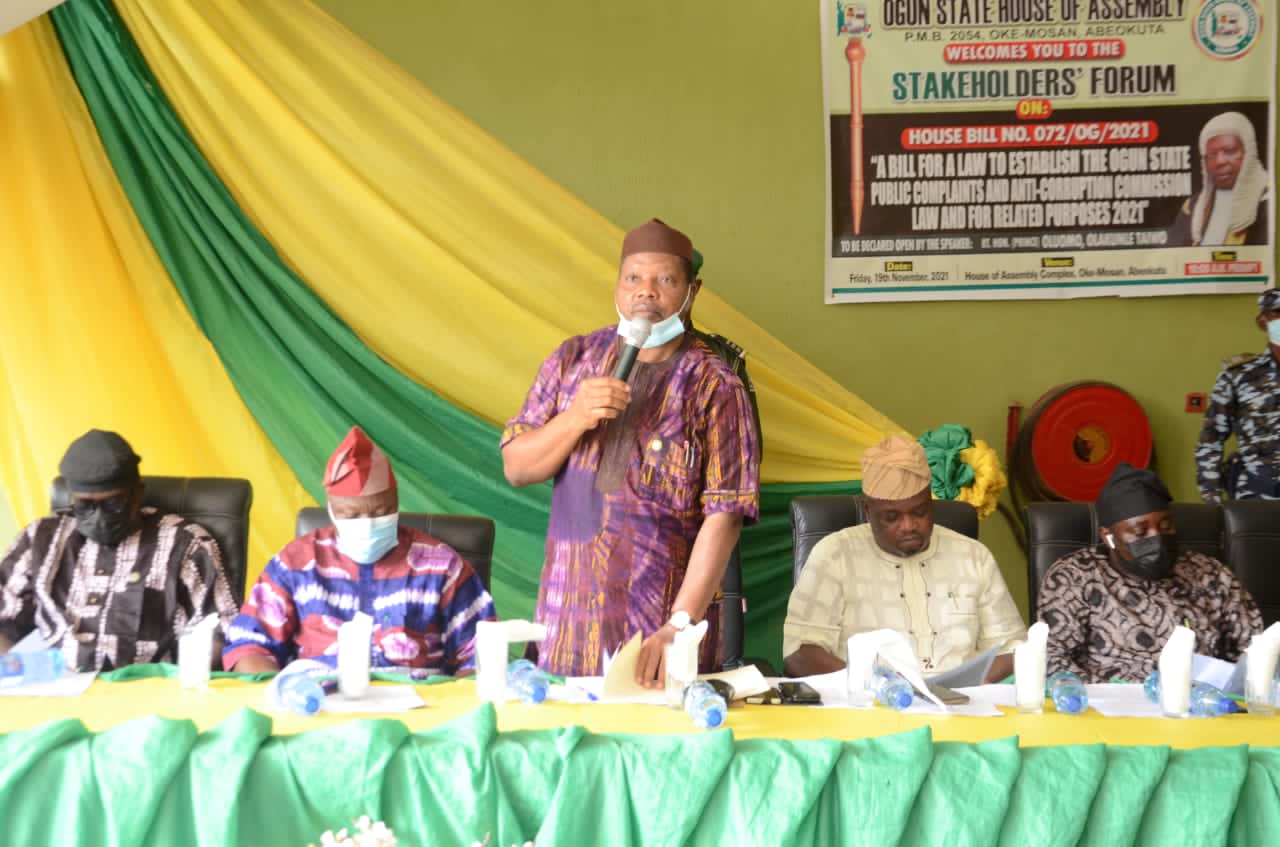 Ogun State House of Assembly has been commended by the relevant stakeholders who spoke on the bill proposing the creation of the State Public Complaints and Anti-corruption Commission Bill, aimed at further entrenching probity, accountability and transparency in the administration of public funds in the State.

The Stakeholders also acknowledged that the Commission would help to represent public interests through rightful investigation of complaints on any form of maladministration and violation of rights.

The stakeholders including Chairman, Nigerian Bar Association, Ota Branch, Barr. Joseph Ogunniyi, National Secretary, Committee for the Defence of Human Rights, Comrade Folarin Olayinka and a legal officer in the State Internal Revenue Service, Israel Ewuoso who proposed prosecuting power for the proposed commission towards ensuring unhindered discharge of its duties lauded the lawmakers for initiating the bill.

According to them, the proposed bill would allow public officers to be effectively alive to their core duties as the State now deserved to have its full-fledged anti-corruption agency.

On his part, the State Auditor-General, Mr. Sunday Olubanjo lauded the 9th Assembly for its efforts towards promoting good governance with emphasis on transparency and accountability.

He added that the bill would help protect the scarce resources of government; just as the Director, Legal Drafting in the State Ministry of Justice, Barr. Mafe Bankole recommended that public officers be excluded from the composition of the members of the Commission to allow independent members of the public with rich knowledge in finance, information technology and audit practices administer it.

Declaring the public hearing open, the Speaker of the Assembly, Rt. Hon. Olakunle Oluomo opined that it was high time the various acts of misconduct that had eaten deep into the fabrics and every strata of the societ were nipped in the bud.

Oluomo added that the proposed bill sought to carry out as well as sustain public enlightenment campaign against acts of corruption and financial malpractices in the State, assuring that the bill would be given accelerated passage in order to ensure transparency in the management of Government resources and eradicate corruption in the State.

Earlier in his welcome address, the Vice Chairman, House Committee on Public Accounts and Anti-corruption, Abdul Bashir Oladunjoye represented by Hon. Isaac Adams noted that the establishment of the Commission would help eradicate financial misconducts in the State, given burden of cases pending with the nation’s anti-graft agencies including the Economic and Financial Crimes Commission (EFCC) and Independent Corrupt Practices and other Related Offences Commission (ICPC).

He expressed optimism that the law upon passage by the Assembly and assent by the Governor would reaffirm the current administration as having zero tolerance for Corruption, which would in turn attract more local and foreign investors to the State.
“Let me emphasise that this Law has been so designed in a way that it will not hinder or duplicate the activities of Federal Anti-graft Agencies; however, it will further complement their activities to completely rid Ogun State of corrupt tendencies and practices”, Oladunjoye clarified.

What My Father Told Me Before He Died -Gov Abiodun