Home News Lagos Sector Commander, Ogungbemide, Rates FRSC ‘Lead Agency’, Praises Media
Facebook
Twitter
Google+
Pinterest
WhatsApp
The Sector Commander, Federal Road Safety Corps (FRSC), Lagos State Command, Olusegun Ogungbemide has said that the establishment of FRSC as an elite corps 33 years ago has significantly imparted on mitigating carnages and crashes on Nigerian roads.
While given his scorecard on Friday during a courtesy visit by the National Association of Online Security News Publishers (NAOSNP) led by its President, Mr. Samson Oki and other Executive members said “we have grown to become a brand in the last 33 years and as such we are the lead agency in road Safety.
“In 33 years of our existence, we have celebrated deaths enough but grateful we have been able to save lives enormously.
“At the point of establishment, FRSC was rated as elite corps and we have been able to replicate that in all of our responsibilities. Your coming is timely especially as we celebrate our 33 years of existence and we are grateful for that. We have been rated first as far as world standard is concerned.
“Other African countries see us as a model in road Safety management and have constantly come here to learn from us and copy our model.
While commending the Corp Marshall, Dr Oyeyemi Boboye for his foresight and dexterity in managing the corps that has led to tremendous progress, reduction of accidents, crashes and deaths, added that the Corp Marshall knew the mindset of the founding fathers of the corps.
“Our Corp Marshall is media savvy and whatever we do as an organization, if it is not projected by the media, there is hardly what is known in the public domain. FRSC is a product of the media but not oblivious of the fact that the media can make or mar you if you are not careful,” Ogungbemide reiterated.
While appreciating the invaluable contributions of the media, Ogungbemide pointed out that under his command, he would continue to collaborate and carry the media along in its programmes. 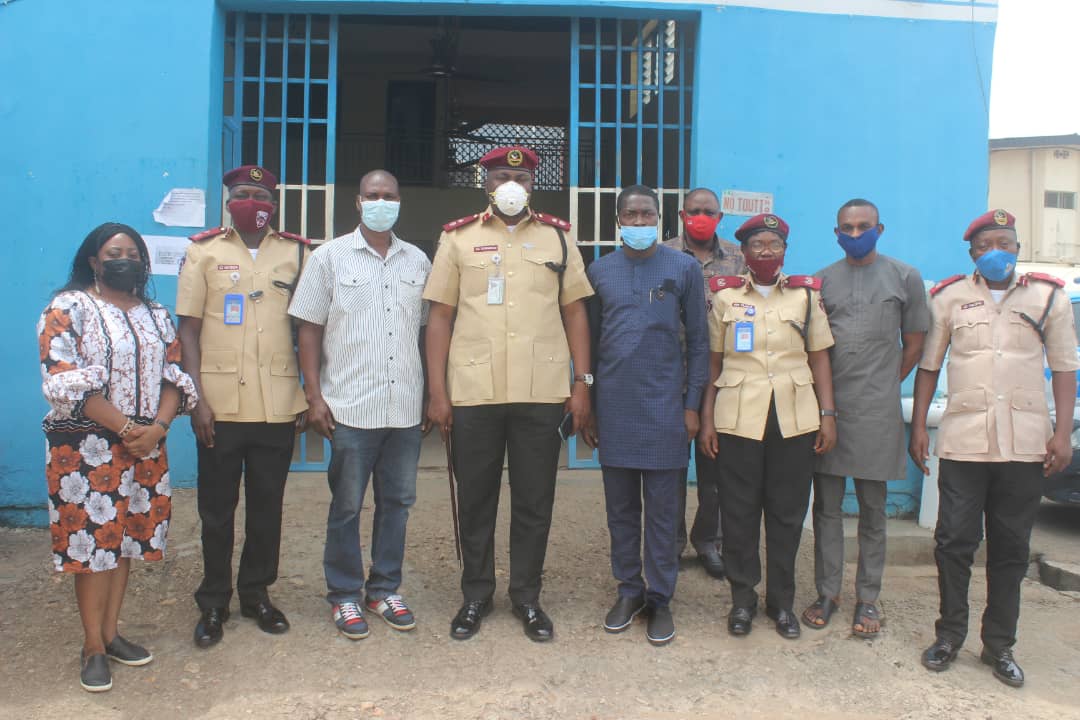 “When I go out for enforcement, I can only tackle 10% of the problems but one sentence from the media can reach millions of the publics. We are ready to collaborate with you because our aim is to reduce crashes by 15% and fatality by 20%.
“I met an indefatigable predecessor and we have brought in different innovations in terms of managing accidents especially at the Kara Bridge, which before now, was notorious for sundry truck crashes. We don’t have trucks falling and killing people there again.”
Apart from building the capacity of his men as part of his achievements since assuming the office as the Sector Commander, Ogungbemide pointed out that since repair works began at the 3rd Mainland Bridge, his men have been able to manage the traffic as well as cohere with other traffic management agencies like the Lagos State Transport Management Authority (LASTMA) and Vehicle Inspection Service (VIS).
Admitting that FRSC has not been a perfect organization devoid of some bad eggs, Ogungbemide explained that they have done everything possible to keep its personnel above board as they have maintained “zero tolerance” in discipline and ensured that every possible malfeasances are put under stringent check.
On his part, while commending the FRSC family for their ingenuity and innovativeness, the President of NAOSNP, Mr Samson Oki eulogized the corps for its responsiveness to the calls by Nigerians which has significantly reduced the carnage and deaths on our roads.
“Your 33 years of existence is not a fluke. We would continue to support you through our unbiased, intelligent reports of your activities. However, we use this opportunity to solicit for the inclusion of our members as Special Corp Marshall.
Soliciting for NAOSNP’s support to tackle drug use and alcoholism among drivers at the motor park as they abuse sachet gins, the Sector Intelligence Officer, SRC Victor Okelola said, “help us sensitize the public about the use of alcohol by drivers and the youths. This is one of the causes of accidents on our roads.
While thanking the Security News Publishers for their visit, the Sector Head of Operation, DCC Cyril Matthew said, “Media is the flagship of any political economy. If the country excel, it is because people are well informed. FRSC has never looked down on the media hence we appeal for your collaborative assistance. We are most grateful for your felicitations with us on our anniversary,” he reiterated.
Other FRSC officers present were the Head of Transport Standardization Organization,
ACC Aderemi Malomo; Head of Motor Vehicle Administration Agency, ACC Edith Eluka; Deputy Public Relations Officer, DRC Jesutomipe Mala; Protocol 1,
DRC Maureen Anyanmekaa and Protocol 11, ARC Ayoola Rebecca.
members of NAOSNP present at the occasion include Mr Okosun Dennis: Theresa Moses: Mr Eric Elezuo and Mr Abbey Omotosho.

Buhari to Bandits: You’re Not Too Powerful to be Defeated, We’re Only Concerned About Innocent Lives