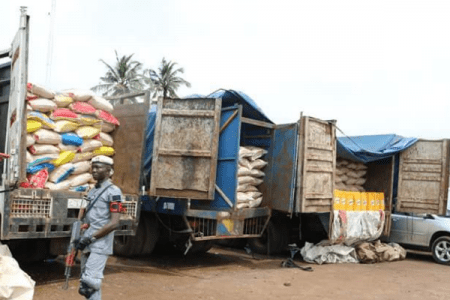 He submitted that the JBPT will continue to ‘stop’ those who try to find ways to ‘sneak‘ things across the border and will continue its efforts  to combat smuggling and irregular migration.

He said the fight against smuggling activities in the North Central will continue to receive a sustained momentum that will lead to more seizures and enforcement of Federal Government policies/directives towards curtailing smuggling activities while urging those who engage in illicit  and illegal businesses to desist from such  and  rather endeavour to engage in legitimate businesses.

‘It has resulted in reduction in respect of smuggling and entry of illegal migrants. We have got an improved agricultural sector as most farmers have been smiling to the banks.

Daily Revenue Generation of the Nigeria Customs Service into the federation account has equally increased.

We have recorded increased consumption of local products while flash points for smuggling in the country have been decimated.

The tripartite agreement between Nigeria, Niger, and Benin Republic has led to increased cooperation between security agencies of the aforementioned countries’, he said.

Peters disclosed  that 13 ‘modified vehicles’  were  intercepted  and  stopped from transporting and smuggling bags of rice into the country at Okuta, Baruten local government while used vehicles and goods were also seized at Mokwa-Jebba and  Gwanara.

‘The utilization of cutting edge strategies in our anti-smuggling efforts led to a single catch (in one Night) of convoy comprising 13 pick-up vans carefully, technically and locally fabricated for the purpose of smuggling activities. They were all loaded with bags of foreign par boiled rice (50kg).

We have also recorded  43 seizures at Mokwa-Jebba, Gwanara, Okuta and other axis of the Sector in 18 days .

One locally made gun, a pistol and 8 cartridges

Five suspects were apprehended in connection with the locally made pistol and cartridges. They are illegal immigrants and were handed over to the Nigeria Police Force and the Nigeria Immigration Service on the 25th March, 2021’, he said.