Home News It’s Sad Money Can’t Buy Life -Tinubu mourns Sani Dangote
Facebook
Twitter
Google+
Pinterest
WhatsApp
The National Leader of the All Progressives Congress (APC), Asiwaju Bola Tinubu, has described the death of Sani Dangote as a demonstration of Allah’s will, saying they could have rallied around to raise any amount should money be a substitute to death. 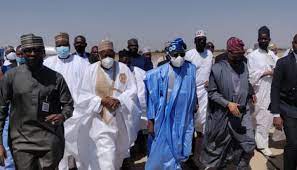 Tinubu made the remarks on Friday when he visited Alhaji Aminu Alhassan Dantata, the patriarch of the Dantata and Dangote families, and uncle to the deceased.

Led to the expansive mansion of the renowned businessman by Governor Abdullahi Umar Ganduje, Tinubu said no amount would have been too much to pay for extension of Sani’s life.

“It (death) has shown the demonstrations of Allah’s will. It is not money. If money can buy life, there is no worth that we will not pay.

“Our presence here is to share the loss with you so that you can feel better. That you still have many children left. May God continue to spare your life and give you joy and keep you in good health and make you the father that you are. to make Kano great, to make Nigeria peaceful in your lifetime and grant Sani Dangote Aljanah firdaus. That’s all we can ask for”, he said.

Responding, Dantata thanked Tinubu and his entourage and wished them a safe return to their destination.

The APC leader later visited the richest man in Africa, Aliko Dangote, the elder brother of the deceased at his Kano residence.

After the visit, he and the governor and their entourage joined the Emir of Kano, Alhaji Aminu Ado Bayero, to hold the Juma’at prayer at the Kano Central Mosque.

After the prayer, they proceeded into the Emir’s palace as part of the condolence visit.

Daily Trust reports that Tinubu has been a regular visitor to Kano state in the last few months, with many interpreting the visitations as part of moves towards 2023 general elections.

Although Tinubu has not formally announced his intention to run for the presidency, his posters and support groups have flooded different parts of the country.

“Jumia promotes equality as every opinion counts irrespective of gender” –