No fewer than four gunmen suspected to be IPOB militants were killed and two others arrested after attacks on the Anambra State headquarters of the Independent National Electoral Commission (INEC) and a Police B division in Awka, the State capital on Sunday night. 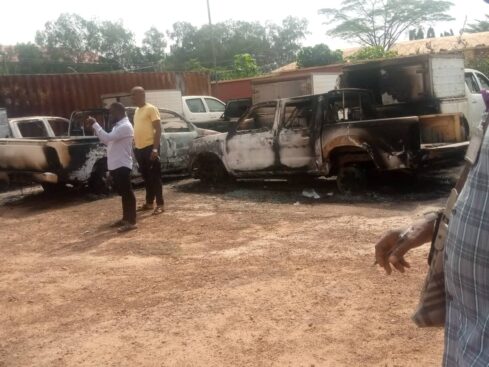 An insider said that the attackers came with three Hilux vans and burnt seven operational Toyota Hilux vans belonging INEC collation centre and a store containing over 100 generating sets. Sources said the attackers had attacked B, Division and failed before proceeding to the INEC office in Awka where they met stiffer resistance.

The sources added that four attackers were killed during exchanged of fire and two others capture alive. “We engaged them in a gun dual and in the process four of them were gun down and two others arrested,” the sources said.

According to the sources, the attack lasted for about one hour before the police finally subdued them.

“They shot for more than 30 minutes at B-Division before leaving. They then stopped at Ekwueme Square and shot for about 10 minutes before proceeding to the INEC Office where we battled them for about one hour and subdued them,” the source said.

When Daily Trust visited the INEC office on Monday morning, it learnt that three Toyota Hilux vans were abandoned by the attackers.

The collation centre and store containing over 100 generating sets and other were burnt down by the attackers who gained access into compound through the backyard of INEC.

It was gathered that over 12 guns, including AK47 and pump action with various bullets, caps and charms were recovered from the attackers.

The Anambra State Police Commissioner, CP Chris Owolabi, who later visited the INEC office to inspect the affected facility, said the police registered over 98 percent success in combating the attackers.

He said that the three Hilux vans used by the attackers were abandoned after police operatives outmatched them with superior fire power.

“The hoodlums first went to “B” division police station and were repelled. Then they came to INEC and our men repelled them, too.

“I can tell you that we recorded about 98 percent success. There were no casualties on the part of the police. I want to appeal to journalists to report carefully because we read where people reporter that scores of policemen were killed.

“Since last night, we have been moving from hospital to hospital, because we are sure some of the attackers escaped with serious wound. We are appealing to hospital management to help us track them.

“I want to plead with Anambra people to go about their legal activities. Twelve riffles consisting of AK 47 and pump action were recovered from the attackers, including live ammunitions ,charms and items of clothing and barrets,” he said.