Home Interview ‘Igbos For A Progressive Nigeria’ President, Lawrence Onuzulike, Speaks on Building Partnership...
Facebook
Twitter
Google+
Pinterest
WhatsApp
Igbos For A Progressive Nigeria, IPAN, is an organization formed to unite the Igbos and build bridges of understanding and partnership with other regions of the country. The national president of the movement, Chief Lawrence Onuzulike, in this interview, reveals why preaching unity is necessary at a time the nation is facing various challenges, among other issues of interest. Excerpts…
Why are you organizing a contest at this time?
The reason for the contest is to avail young Igbo intelligentsia the opportunity to research and provide ways Igbo nation could continue to attain its potential in a united Nigeria. We felt that many young people of today don’t see any future in this country anymore, because the Nigeria’s conversation space has been dominated by hopelessness and negative projections by the media, hence the need to re-focus the minds of the youths. It’s time to find ways to provide visible paths to success for our young ones and the essay is one of the ways to do that.
Does it align with the mandate of IPAN?
Completely! IPAN is a pro Nigeria group that fights for the successes of Ndigbo. So, an essay on how the Igbo nation can attain her full potential in a united Nigeria is perfect and an important part of our objectives.
Do you think this is what is needed at a time like this, looking at the current situation of the country?
What is currently happening in the country is partly because of what I said earlier, hopelessness. The young people cannot see their future in Nigeria anymore. They can no longer see a clear path to success in Nigeria. Most times, IPAN blame the politicians and our leaders for keeping the people impoverished for such a long time. The essay will help in enlightening our people that there’s still hope in a united Nigeria, and will go a step further to provide ways to achieve success.
Aside the essay contest, which other activities do you have to mark the IPAN’s first anniversary?
We decided early that we won’t be holding parties or doing any kind of Jamborees to mark our one-year anniversary, but that we’ll continue to do projects that will benefit ordinary people. The essay contest, for instance, will not only provide a platform to discuss how to achieve great things in a united Nigeria, but will employ Nigerians, as about N200,000 will be shared to the winners. We’ll also be donating to schools and orphanages in South East States. We feel it’s not enough to only talk, but to also to do something the people will feel physically. Our other plans include peaceful marches in South East to demand for peace and unity.
How would you rate the achievements of IPAN in the past one year?
For a group that’s just one year old and self-funding, I think we’re happy with what we’ve achieved so far.
Personally, I think our biggest achievement so far is providing Igbo progressives worldwide the platform to share their views in matters concerning the Igbos. For many many years the voices of the progressives were stifled, with the wrong narratives being pushed by certain people. We’re happy that today Igbos that desire a united peaceful Nigeria can boldly come out and say that without fear of being abused or labeled traitors. We also see it as an achievement that today many Nigerians know that many Igbos love their brothers and sisters from the other regions. We’re also happy that our relentless efforts at enlightening, educating, re-focusing and reorientating our people are paying off gradually, as many Igbos now agree with IPAN that we should start holding our leaders in the South East accountable. We particularly view this as a very good development as our leaders have gotten away with so much while making us think Abuja is our problem. We’re glad that many Igbos are now interested in what they’re doing with our allocations and IGRs.
If you remember when a member of the British parliament claimed that Gowon stole half of the Central Bank, it was IPAN that took up the fight on behalf of Nigeria by petitioning the UK. It was IPAN’s petition that got the UK to dissociate herself from the statement.
At IPAN, we’ll do anything legally to protect Nigeria and will go to any length to fight for peace in our country. If you recall, IPAN was the only Igbo group that ever sat down with Miyetti Allah’s leadership to discuss ways to find a lasting solution to the herdsmen issue in the South East. Even though we’re still expecting Miyetti Allah to keep their own part of the bargain. 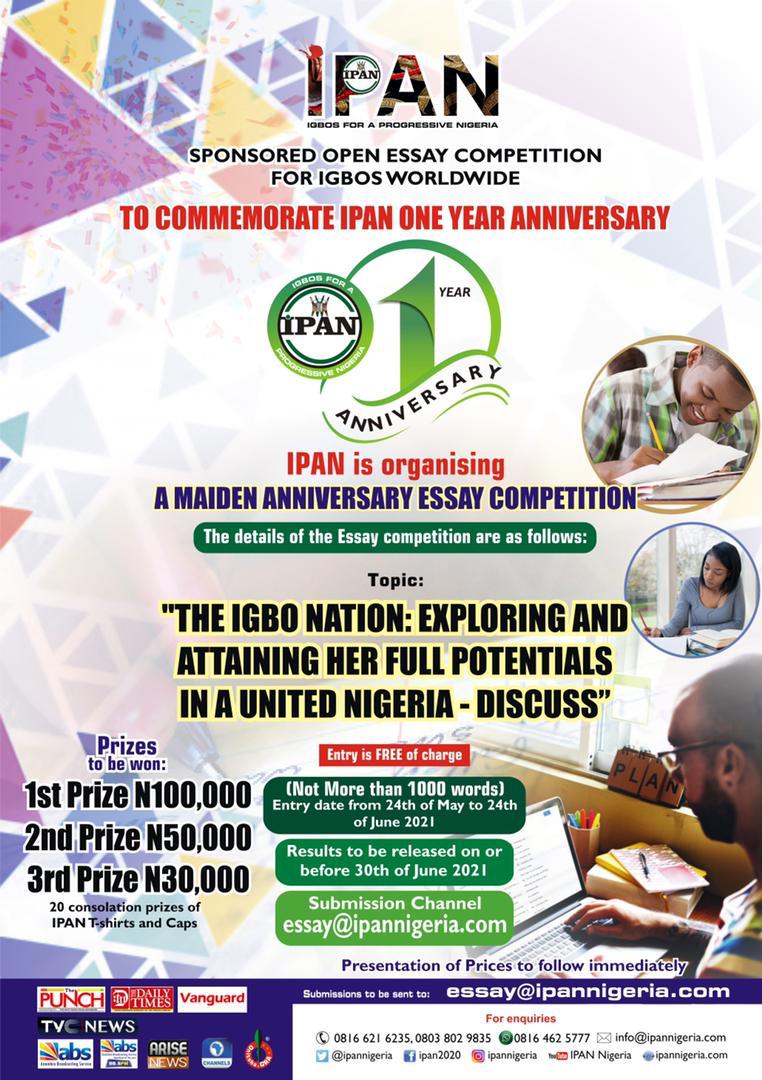 IPAN, through its social media platforms have doused many burning situations in the country that could have led to loss of lives. One of the instances was sometime last year when a person made a propaganda video purportedly showing Igbos driving away herdsmen from Ebonyi state. The video quickly went viral and almost led to the attacks on Igbos in the north. It was a timely intervention of IPAN that doused the escalating situation. We provided the correct narration of the event, that the families leaving Ebonyi were doing so willingly and that they do so during dry seasons and return back to the state during raining seasons, that as they were packing up their belongings, a young man came to their camp and was very nice with them, but they didn’t know he was secretly recording them, and later posted it online with false claim that they were being driven out. That single video could’ve led to the loss of lives in Nigeria if IPAN didn’t intervene.
Over the months that IPAN have been in existence, it has been an extremely busy period for the group as there’s always something urgent to attend to. During the peak of violence in the South East, IPAN members took to the streets of Awka in protests against the insecurity in Igboland. We also paid a visit to the Commissioner of Police in Awka to commiserate with the police for the loss of their gallant officers in the line duty.
The list is endless. But we know that the second year will be busier at IPAN as so much still needs to be done.
What are your plans for the upcoming years?
The plans are to keep doing what is stated clearly in our objectives: to keep preaching for one Nigeria, fighting for the unity of Ndigbo and the development of the Southeast. This means we will keep educating our people about the needs to build bridges of understand and partnership across all regions. We’ll keep providing the platform for Igbo progressives to contribute to matters concerning the Igbos. We’ll keep holding Igbo leaders accountable. We’ll keep fighting for Ndigbo to be part of the scheme of things at every level in Nigeria, and much more.

“Sacking Service Chiefs May Not Be Solution To Ending Insurgency” …Aduwo