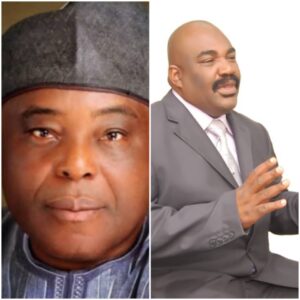 Former Governorship aspirant of the PDP in 2012 in Edo state, and a Management Staff of AIT, Raypower, Jacob Egietseme Idinye, in this interview, extols the virtues of his principal at 70, High Chief Raymond Anthony Aleogho Dokpesi.

High Chief Dokpesi was born 25 October 1951 in Ibadan whose parents are from Agenebode, Edo state. He is the founder of DAAR Communications comprising of Ray Power Radio Station and Nigerian TV network Africa Independent Television (AIT).

High Chief Raymond Dokpesi is 70 what can you say about him?

Celebrating a birthday at any age is a special event, a 70th birthday is extra special. It is a significant milestone in life, therefore I use this occasion to truly celebrate my boss, my mentor and a worthy leader as he joins the league of septuagenarians. He is a great leader that believes in the project he started with, and he believes anything he starts he will finish well and has recorded many success stories in his endeavours. He doesn’t take ‘No’ for an answer from anybody, and he is the type that always show good examples that are worthy of emulation. He believes in excellence, he’s a good listener and he listens to opinions of others but detastes failure. He forgives easily without taking you to Court or the Police, he is a lover of peace.

You’ve been together for decades how will you describe the relationship?

Yes, we’ve been together for more than 20 years and I’ve been at peace with him, he respects my views and I do respect his as well. He has this unrepentant spirit of helping people especially those in need and he also believes in building new ventures that can impact lives socio-economically, and of course I have no regret with the relationship I have with him for over two decades now. He is somebody everyone loves to be with especially if you understand him. He doesn’t like firing people at the expense of his companies and his forgiving spirit is amazingly unparalleled.

You are both in PDP how will you explain this relationship thus far?

The issue is that one must belong to any political group of his choice whether privately or openly. However as a matter of principle I don’t discuss politics in the office, I only do that in my home state in Edo, and when I am in Lagos or anywhere else I face my business and journalism career. For High Chief Dokpesi being in PDP we don’t cross each other’s part, we don’t discuss who the next Chairman, President, Governor or Councilor etc will be and we’ve never clashed. Politics should be about giving back to the people positively. I am not a career politician, unlike those desperate and overambitious politicians and that is why we see parallel primaries within political parties within communities etc. For Chief Dokpesi he is into politics, yet he is running his business meritoriously and doesn’t do politics with bitterness, no resentment and doesn’t believe in factional politics, very principled and he doesn’t compromise. He is a self-made man and he has used his business empire to build people’s career, and make them enjoy life of fulfillment and he doesn’t kill people’s dreams, he often make them realize their dreams without regrets. He invested so much in politics and has sacrificed a lot in spite of the risks and challenges associated with it.

I must also add this, in 2006 I contested for Edo Governorship poll on the platform of AD which subsequently changed to AC but Chief Dokpesi was in PDP at that time, and he never victimized me, our relationship was cordial and very pleasant. That was the period Comrade Adams Oshiomhole came in to AC and took the party ticket from some of us who were already in the party, but I later left the party in 2006. It is on record that I brought ACD which later turned AC to Edo North in the entire 6 Local Government Areas, including the Wards and Units. My relationship with my Chairman, High Chief Dokpesi during this period was intact. I even took leave of absence from office and he gladly granted and approved it for me and when I returned after the election he did not only accept me back but also promoted me to the next grade and stage of my journalism career and that is leadership. He is a true trailblazer, a pathfinder, a man with a large heart who has the matrix for raising talents and positioning the harvested talents into stardom and success.

And I think I should also talk about his political travails how he was vilified and victimized over trumpup and spurious charges at a time like this. Without contradiction there was no crime committed by him in 2015 when his Daar Communications plc bidded for jingles and TV commercials for the Goodluck/Sambo PDP Presidential campaigns, but thankfully God vindicated him and he was subsequently exonerated, the Court of Appeal, in a unanimous judgment of its three-man panel, upheld the no-case submission filed by High Chief Dokpesi and DAAR Communications against the seven counts of money laundering preferred against them by the Economic and Financial Crimes Commission (EFCC).

And during those ugly developments he never gave excuses for not going to Court even when he was indisposed he still pushed through to appear in Court. To the glory of God, he is now 70 on a clean slate, we thank God for justice, sound health and a life of purpose and fruitfulness. I also thank God for his life having survived COVID-19 in 2020; all these happened so that the name of God will be glorified.

Being the newest septuagenarian what is going to be your advice for him?

Well it depends on what you mean when you asked about my advice to him at 70, for me I am not 60 yet, so to start advising a septuagenarian isn’t going to be a easy task for me, all I can do is to pray for him for God to enable him more grace, mercy, wisdom, knowledge and understanding.

My kind wishes for him is also that God should grant him opportunity to grow from strength to strength and all what he has built over the years will not be ruined no matter the level of the storm and it shall be victory for him in all fronts. However, I may now advice him to continue to treat people well which is what he is always known to be doing.

He should do more for the youths, believe in their course and interests and shouldn’t renege in building capacity and empowering the people socio-economically. And as we all know, history is very replete about AIT which Chief Dokpesi started over 20 years ago through the station he revolutionized broadcast industry, he changed lots of concepts, he is the brain behind first TV and radio stations that started 24 hours broadcast. He has done a lot to humanity positively, and I pray he will continue to live a worthwhile life of prosperity and God’s unrelenting blessings and breakthroughs.

“Nigeria Must Restructure To Remain One” …Comrade Aghedo Kehinde Stephen

‘Igbos For A Progressive Nigeria’ President, Lawrence Onuzulike, Speaks on Building Partnership and Understanding Among Nigerians