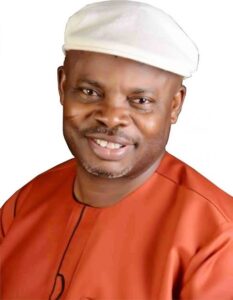 The quintessential lawmaker and trade unionist is an indigene of Uneme Nekwah in Akoko-Edo Local Government Area of Edo State, Nigeria; he is a member of the House of Representatives representing the good people of Akoko-Edo Federal Constituency.

Hon. Akpatason had his secondary education at Akoko Edo Grammar School and graduated in 1982 with a General Certificate of Education (GCE). He thereafter proceeded to the College of Education in Warri, Delta State and obtained a certificate in Education in 1987. He also earned a Bachelor’s degree in 2002 from the University of Abraka in Delta State. In 2005, he graduated from the Chartered Institute of Procurement and Supply. He also attended the National Institute for Policy and Strategic Studies in Karu, Jos, Plateau State in 2006.

Prior to joining politics, Hon. Akpatason worked at Shell Petroleum Development Company of Nigeria and his clout and active participation in trade union activism earned  him the opportunity of becoming the National President of the Nigeria Union of Petroleum and Natural Gas Workers (NUPENG) for two terms and the National Trustee at Nigerian Labour Congress (NLC).

Akpatason a true family man blessed with a beautiful wife and children is indeed a Federal parliamentarian with a remarkable hat-trick; he is a ranking member of the House of Representatives, Deputy Majority Leader of the 9th Assembly who equally served as Chairman of the South West of the House of Representatives Committee on constitution review public hearing in Ondo state.

He is undoubtedly a selfless servant of the good people of Akoko Edo whose developmental efforts are evident to all, and has demonstrated his humongous capacity to bring massive democratic dividends to the doorsteps of the good people of Nigeria’s largest and the only unaltered local government area.

Impressively, there are also sterling records of how Hon. Akpatason attracted employment opportunities to his community at various levels as well as his gargantuan developmental illumination to his constituents since his inception to the National Assembly right from 2011.

To his credit, various socio-economic empowerment programmes were facilitated across political divides, free medical care to the establishment of integrated farms in two centres in Akoko-Edo Local Government Area thereby leading to a huge developmental illumination are indicative of his capacity to advance his constituency from the doldrums of developmental challenges which has ravaged her over the years.

It is the belief of his people that he will continue to use his good offices to brighten the future of his constituents and constituency also with the prayer that God will never stop to strengthen, guide and uplift him in his endeavours with good health, greater wisdom and interminable prosperity.

Nigerians in general particularly stakeholders in the trade Union movement are proud of his monumental strides in adding value to humanity which stands him out as a northern star in the galaxy of stars. Congratulations to one of NUPENG’s unique veterans; our nation rejoices with you, a consummate professional, a respected nationalist, a committed philanthropist, a politician with conscience/principle and a loving and amazing mentor.

Happy birthday to you sir.

Nigeria In Need of Ethical Journalism Practice *by Emmanuel Ajibulu

The Milestone of The Constitution Review *by Bamikole Omishore