Medical doctors in Kwara State on Monday embarked on a seven-day warning strike across the 16 local government areas of the state. 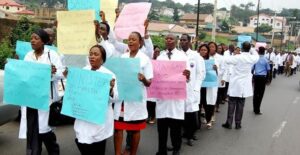 They said the industrial action was to protest unsatisfactory working conditions and demand better welfare.

Dr Saka Agboola, Chairman of the association, stated this during a press conference at the sidelines of an emergency congress in Ilorin.

Agboola explained that the association had been patient and given a series of ultimatums to the state government concerning their agitation on members’ welfare.

He observed that as much as it is painful for the executives to reach such a decision, Congress had, however, unanimously agreed on a seven-day warning strike action.

According to him, this is to give room for engagement with the government on some of their agitation, including good conditions of service, especially in the payment of new remuneration to the members of the union.

“It has gotten to a point that the wellbeing of doctors in Kwara has to be seriously looked into.

“We have responsibilities to our families, our neighbours and even to our patients. There is a need to remunerate the doctors to get efficient output.

Agboola reiterated that the one-week strike action will afford the government the opportunity to re-engage the association.

Reacting to the development, the Permanent Secretary, Ministry of Health, Dr Abubakar Ayinla, urged the doctors to suspend the planned strike.

“We are dismayed by the decision of the doctors to hold a warning strike despite the unprecedented commitments of the government to their welfare.

“This administration has done so well for the health sector and it is prepared to do a lot more within available resources.

“We urged our medical doctors to consider immediate suspension of the action, while government implements the 70% proposal that its finances can struggle with at this time.

“Suspension of the action will reaffirm the time-honoured belief of health workers in the sanctity of human life and stability of the public health system”, the Permanent Secretary added.