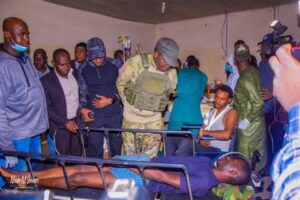 At least 143 bodies have so far been recovered and buried in the wake of brutal attacks on Wednesday and Thursday on several communities in Anka and Bukuyyum local government areas of Zamfara State, it has been gathered.
Recall that migrating terrorists loyal to terror kingpin, Bello Turji, who were displaced by fighter jets of the Nigerian Air Force from their enclaves in Fakai forest in Shinkafi Local Government Area, were moving southwards of Zamfara when they descended on the locals, killing many.
Residents said yesterday that more corpses were being recovered from bushes as some of the people were caught unawares on their farmlands.
It was reported that the remains of some of the victims were decapitated or burnt beyond recognition.
A resident identified as Babangida said, “One of the pathetic stories about the carnage is that women and children were not spared. As blazes ripped through residential houses, children and women were not allowed to escape because the terrorists stood outside, waiting for anyone coming out.
“The charred bodies of the victims were later recovered and buried. Those who had managed to escape are taking shelter in some considerably safer communities. It was really very calamitous.
“The communities that were assaulted are more than 10. This is because the armed men were moving from one community to another on motorbikes. Although they have withdrawn, they are not far from the raided villages,” he said.
A retired soldier told journalists that over 250 people had been killed by the attackers.
“About 2,000 cattle and other domestic animals were rustled while dozens of residential houses and food stores were burnt to ashes. Even if the situation stabilises, the residents would be left without food to eat,” another source said.
Five communities of Kurfa Danya, Kurfa Magaji Rafin Gero, Tungar Isa and Barayar Zaki in Bukkuyum and Anka local government areas were reportedly under attack.
The terrorists took over 48 hours killing the locals and burning their houses and farmlands.
A fighter jet dispatched to the area on a rescue mission could not achieve a lot because after sensing danger, the terrorists melted into the civilian population.
Another source said the terrorists used the people as human shields, making it difficult for the fighter jet to bomb them. “It was at night that they disappeared because it was practically impossible for the fighter jet to attack them,” he said.

House of Reps to Probe Faceless Police on Highways