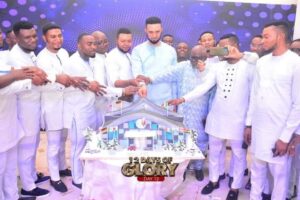 The 18th Annual thanksgiving service held at the international headquarters of Grace Nation aka Liberation city Ojodu Berger Lagos Nigeria signal the end of the church anniversary conference tagged “The 12 days of glory” which begins on the 17th-28th November 2021.

The annual conference was witnessed by over 40 million viewers across the world via Liberation TV and all Grace Nation online platforms with over 1million in attendance, Among whom are the Olojudu of Ojudu Land Oba Segun Benson, Bishop Isaac Idahosa, Bishop Ben Samah UK, senior Son Of the Prophet, Pastor Sylvester about 200 pastors from Grace Nation Branches across the globe. The conference recorded, Prophetic Ministrations, testimonies, miracles and deliverance, moreover many unbelievers gave their life to Christ at the conference. 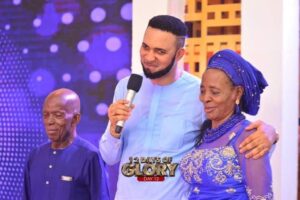 Earlier in his sermon with Topic THE POWER OF THANKSGIVING, the Generational Prophet of God and Senior Pastor Grace Nation worldwide, Dr Chris Okafor said Gratitude is an application for more blessing, that is, when you give thanks, you are reminding God to do more for you.

The Oracle of God as he is fondly called said when you give praises and thanksgiving to the almighty, there is this assurance that God put you ahead of other in blessing; either you are in a good condition or not give thanks.

The Clergy further stated that there is nothing that will bring God into your battle than thanksgiving, because God listen to the request of who give Praises and thanksgiving in whatever situation.

The Generational prophet of God said said Christians must leave a Life of giving praises to the almighty and thanksgiving.

Sharing the journey of Grace Nation so far. Dr Chris Okafor explained that though the journey has not been so smooth but God has been faithful to Grace Nation family. The man of God said church which began in a Primary school compound 18 years ago has expanded to over 200 branches across the world. Winning souls to the kingdom of God and depopulating the kingdom of Darkness, the Generational prophet of God declared that in every Glory there is always a story to tell to the glory of God.

A special 18th years anniversary cake was cut amid special praises and thanksgiving songs rendered by Nigerian famous Gospel Act Eben alongside his Wife, Liberation Voice Sonorous singer Gabriel peters too is not left out as he sing his best all to the delight of faithful’s who attended the thanksgiving.

Prayers was said by Bishop Isaac Idahosa for Dr Chris Okafor and the Grace Nation Family, the man of God, Bishop Idahosa said despite what God has been using the generational prophet of God for and his Ministry, he said by this time next year i will be known Ten-fold across the world in Jesus name Amen.

The 18th years thanksgiving was rounded up with a Get together Dinner at the newly constructed church office while unconfirmed gist as it that the 30,000 seated capacity church auditorium will be dedicated come January 2022, the auditorium is currently undergoing massive expansion work.

The Glitz. The Glamour. The Faces @ Excellence Recognition Awards 2018