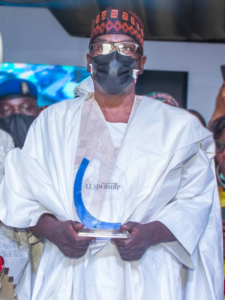 ‘The Governor has since his inauguration charted a new course for the state on all fronts. He started by focusing attention on investments in basic education, primary healthcare, rural and urban roads, water and sanitation, gender inclusion, youth engagement, citizen engagement and efforts designed to open up government for public scrutiny and accountability.

As a leader, he has run a lean administration and has led his team with his signature, simplicity and tolerance for opposing views. For confronting the economic challenges of Kwara State through his determination to turn around the state positively and free the people from the shackles of poverty, thus making it possible for citizens of the state to feel the impact of governance after years of neglect, AbdulRahman AbdulRazaq is Leadership Governor of the Year 2020’ Leadership Newspaper submitted.
The governor received the Award at the Awards ceremony organized by the media outlet in Abuja penultimate week.

Governor  Abdulrazaq said he dedicated the award to God and to the people of the state while thanking the newspaper for the honour.
“I dedicate this award to God Almighty who has brought us this far and to the good people of Kwara State for their trust and support.

Our team has the credit for the fundamental changes Kwara has seen in every sector in the last two years.

I commend their understanding of the deeper meanings of Otoge. The much we have done in repositioning basic education, health, water, safety net for the poor and general infrastructure was made possible because my team has offered to make sacrifices for a greater Kwara. I am hugely indebted to them and to the people of Kwara for their trust and support every step of the way.

This award is a tonic for our team to do more. And we will deliver a lot more to make Kwara work for its entire people.

We are grateful to the Management, board of editors and every member of the Leadership family for this honour. We do not take it for granted.
Finally, our team and the people of Kwara are eternally grateful to Mr. President for his uncommon support for the Otoge administration. He has repeatedly shown that he truly understands the Kwara story.

I reassure everyone who has followed the Kwara story that, like Japan after the Second World War, Kwara is ready to lead again! He said